How Orfali brothers are redefining gastronomy and Levantine dishes 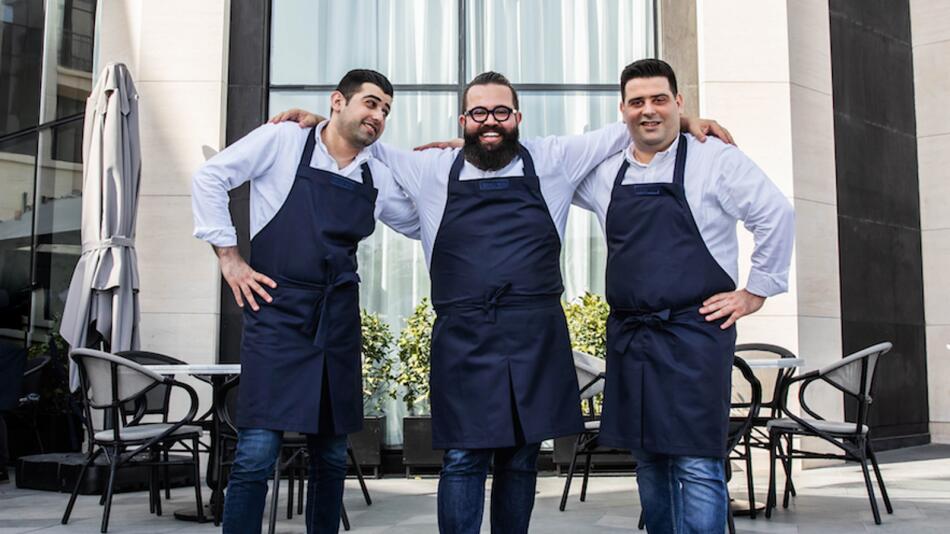 Orfali Bros, where tradition meets modernity, is an ode to reimagined Allepian and Levantine dishes that echo the rich flavours of Mediterranean cuisine with a hint of global influences

It’s 9 in the evening on a weekday in Dubai. Several diners — Emiratis, Arabs and expatriates — are waiting patiently to get into a 60-cover bistro at WASL 51 Mall, a new development in Jumeirah, one of Dubai’s old residential areas.

Welcome to Orfali Bros, which has become a rage since the avuncular Syrian master chef Mohamad Orfali turned his passion for food into a family affair last year. Mohamad’s brother-in-arms are his two siblings Wassim and Omar — the guiding forces behind the trendy bistro, which opened in March 2021 and serves reimagined Levantine dishes.

So, what’s the unique selling proposition of Orfali Bros, as Levantine cuisine abounds in every nook and cranny in Dubai and restaurants open and shut shop with unflinching regularity even before you could say bon appétit.

The Orfalis have reinvented their native Aleppo cuisine that has struck a big chord among their diners — the bistro is open daily from 12 noon to midnight — to make its debut at the inaugural Michelin Guide Dubai, which was released in June.

Orfali Bros is among 14 Dubai restaurants to get a Bib Gourmand, which translates to good quality and good value cooking. In June, the Michelin Guide released its Dubai edition — the first in the Middle East — that highlighted 69 restaurants, covering 21 types of cuisine. Altogether, nine and two restaurants received one and two Michelin Stars respectively, and another 14 were awarded a Bib Gourmand. Mohamad, who left Syria and came to Dubai in 2007 and his brothers joined him in 2013, showed the light to his siblings that cooking to your heart’s content can be a viable career option.

In retrospect, it was an arduous task as he had to convince his mother about the career choice. Though their mother was a sceptic — she believed in the conventional wisdom of cooking is for women — the supportive father made their career path easier.

Wassim was tasked with pastries, while Mohamad did the cooking, when they got into the food and beverage business in 2015. Omar, the youngest brother, wasn’t even contemplating working in the field. He was inspired by the project, and eventually joined his brothers.

“Omar is a young talented chef following in the footsteps of Wassim, who started cooking at the tender age of 12,” he says. “I look back in wonder and bemusement because we’ve — Wassim and Omar are artful bakers — created our own brand of cuisine. Food is our language of expression, and we serve those dishes that we love to eat,” says a jovial Mohamad. “No wonder, we’re constantly pushing the boundaries of cooking to discover new flavours. Our dishes are an inextricable linkage with our past and remind us of who we are and where we came from. Our striking two-storey kitchen is an epicentre of our creative juices.”

Mohamad’s chance encounter with a Spanish chef changed the course of the gastronomic journey. Strangely, he had little knowledge about Syrian and Middle Eastern cuisine till he enrolled into a culinary school.

“At the outset, I wasn’t all that excited to become an Arabic cook. I believed in the popular perception that chefs are more into French or Italian cuisine. But the first thing I learnt was how to make kebabs. Soon, I realised that I knew about our own gastronomic culture. I didn’t know where these recipes came from and the fascinating history behind them,” he adds.

He discovered Levantine cuisine on a trip to Spain. He recounts his self-discovery in vivid detail. “At Alicante in Spain, I had a chat with a famous chef, whom I told about my excitement of meeting Ferran Adria and getting to learn about molecular gastronomy movement. However, he punctured my enthusiasm. He told me Aleppo is a culinary gem. He asked me what I know about my own cuisine. I had no answer.”

Mohamad came back home and after a lot of research discovered that the Syrians had similar concepts to molecular gastronomy for years. For instance, “the Aleppian cuisine is both sustainable and seasonal”. “We’re all about native ingredients, about harmony and matching flavours. We’re modern and classic at the same time.”

Mohamad learnt a big lesson to start appreciating the food that he saw regularly throughout his life. Significantly, the Aleppian cuisine has inspired diverse culinary traditions and cultures around the world because of the Silk Route. Mohamad has also made a name for himself as a TV chef, especially during the Holy Month of Ramadan with a show called Shu Bihib El Orf: Lahme w Bas, on Fatafeat his 14th production with the Arabic Middle Eastern food and lifestyle TV channel that was launched in 2007. These shows opened a brave new Arab world for Mohamad as “over 75 million viewers were watching me”.

Popularity be damned, he says, “what I loved was creating the bespoke content and I had to do a deep dive about the history of food, their origin for discernible viewers”. He attributes the dishes that are served at Orfali Bros to these TV shows. “Modern Arabic cuisine has inspired a new generation of young chefs,” he says proudly.

Mohamad draws a fine line between gastronomy and fine dining amid Dubai’s emergence as an outpost for international Michelin-star chefs, where hidden gems like Orfali Bros have carved out a niche for their regional cuisines.

“Dubai is a melting pot. It’s always a challenge to bring people from all over the world to a restaurant. Bistros is all about good food at an affordable price, which has caught on,” he says.

Mohamad has hired young chefs from 20 different nationalities and is training them. “Change is the only constant in life. We’d like to keep reinventing ourselves. Dubai has given us a great base as we strive to get better every year,” he adds.