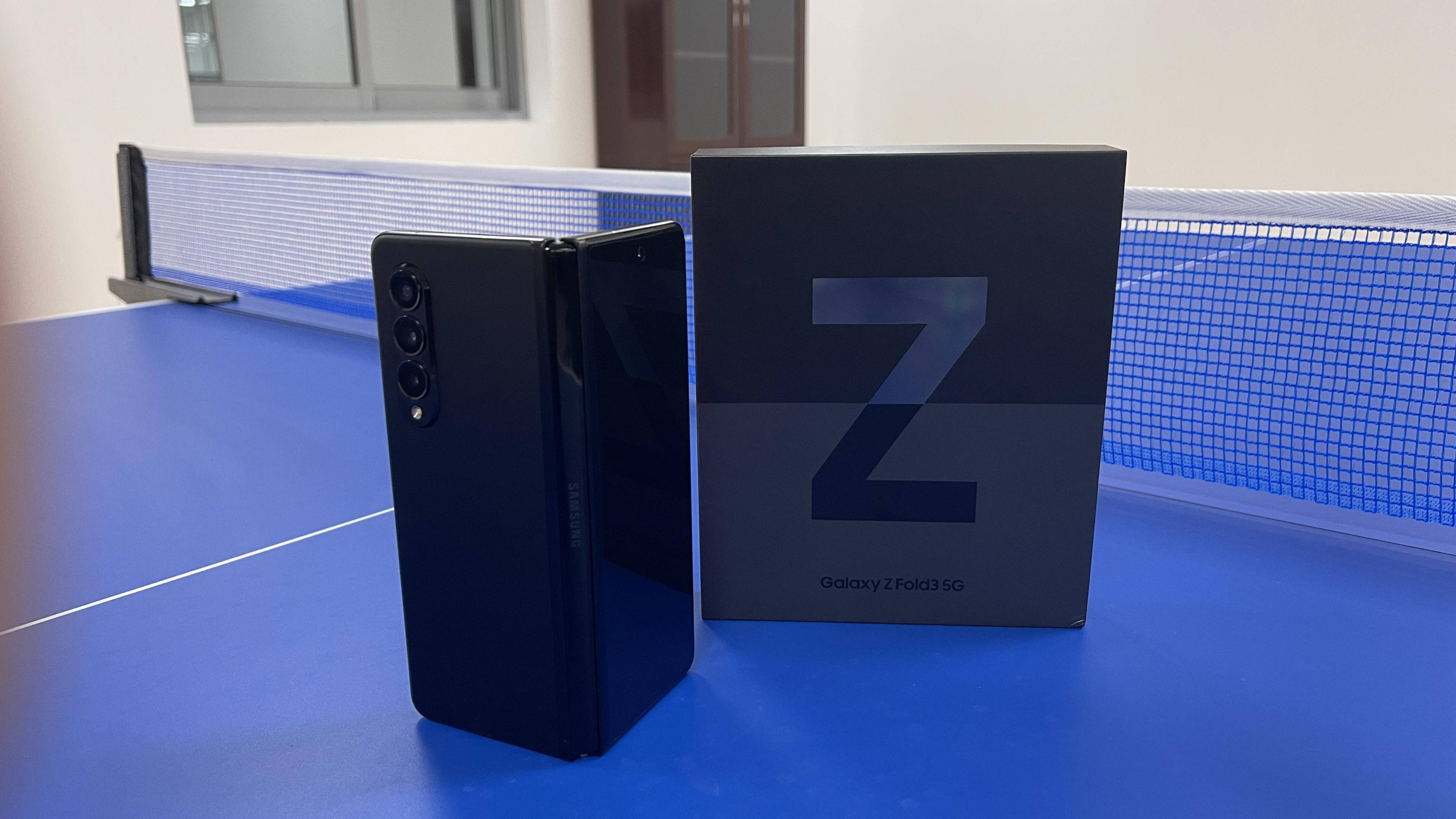 Just a few days ago, we took a very nice peek at the Samsung Galaxy Z Flip3 5G, and within that we did promise that its big brother’s turn to be on our grill was just around the corner.

Well, here it is, about to unfold before your eyes (pun intended).

The third iteration of Samsung’s flagship foldable device, the Galaxy Z Fold3, is about to hit shelves and pre-orders have apparently flown off the virtual shelves. Sure, there's no Note this year, but its spirit lives on right here. And then some.

TALE OF THE TAPE

Just like the Flip3, a bird's-eye view shows a lot of unchanged specs, save for certain tweaks in specific areas. But also, Samsung focused on toughening up the Fold3, which we'll dig into soon.

We still get practically the same aesthetics, with a 7.6-inch main screen and 6.2-inch cover display. The overall dimensions are a hairline slimmer, with its weight down 11 grams. And while indeed the Fold3 is a huge device, its ability to clam shut gives it a height similar to most big-screen smartphones today, with basically double the thickness, but easier to fit into your pocket thanks to its slimmer profile when folded.

When folded, the card tray, volume rocker and power/fingerprint button are all on the right; unfolded, the first one settles into its usual left-hand side position. The USB-C port below shifts to the right when opened, while the dual speakers on top and below go the left. There are three colours, but we admire both the black and green options, as they just have a really solid and consistent finish. Again, the Samsung branding is located on the improved hinge.

Samsung's 'glasstic' finish on the rear ensures the device won't easily slip off your hands, with those two aforementioned colours hiding finger smudges pretty well. The camera block is as simple as it can get, complementing the elegant looks the phone has. Honestly, we picked green over black, but the latter is just growing on us.

The cover still has that edge-to-edge display, and it seems brighter compared to the Fold2. It may feel weird to peer into such a slim screen given that we're used to a wider one with the phones we use daily, and the virtual keyboard may give some users the fits since it's crammed into that slim format. Nevertheless, as long as you hit the right areas, typing — and navigating, overall — won't be a problem. The punch-hole cover camera also remains as it is, and you still get access to the side app panel that you can bring out by swiping from the right.

Then there's the dichotomy when you open it up — it's really wide (as if you didn't know this by now, huh?): The digital space you crave for, Samsung happily provides a lot of it on the main screen. This has been said a gazillion times before, but we still have to state the obvious: This is a tablet disguised as a smartphone, with the added bonus of being able to fold it.

The virtual keyboard on this display remains spread out well so both your thumbs can reach every key comfortably — but that blank white space in the middle still feels really weird to look at, as if something's missing. And even if you use it in landscape mode, everything is within reach while the Fold3 sits good on both your hands. Of course, one-handed navigation is still very much possible, but of course there are certain things and areas you're limited. And, pleasantly, holding it with one hand doesn't really strain your joints.

One neat trick Samsung slapped in on this display: It now has an under-display camera (compared to the Fold2's punch-hole). Located on the upper-right hand area, it looks like a mini virtual grille. You'll definitely see it when using the Fold3 normally, but it does gradually disappear if you tilt it any way. And it transforms into a virtual punch-hole when you use it, so that you know where you're supposed to look at.

And arguably the biggest addition to this iteration's specs: The Fold3 — just like the Flip3 — is blessed with Armor Aluminium, which Samsung says is their toughest one yet, and Corning's best by far, Gorilla Glass Victus. You also get the durability guarantee of 200,000 folds.

In a rather cute way, Samsung describes the Fold3 by using those exact letters, 'FOLD': First S-Pen on a foldable; Optimised for multitasking; Large and uninterrupted display; and Design. Let's go through those one-by-one.

First — fittingly — the Fold3 is the first foldable that supports the S Pen. Now you get all the goodies Samsung's stylus has on offer on an even bigger screen, but there's a caveat: There are two S Pens you can use on it, the Fold Edition and Pro, both of which are sold separately. The difference: Simply put, the Fold Edition has all the basics, while the Pro adds Bluetooth manoeuvres and Air Gestures. There's also an S Pen cover case available, which allows you to neatly tuck in an S Pen right on the hinge area.

With those new two, Samsung's S Pen line-up is now up at five, joining those used on the Tab S, the more recent on the S21 and, of course, the legendary one on the Note. Of note (no pun intended), and in case you missed it, there is no Note device this year. Will the Fold be the Note's permanent replacement? Samsung's hasn't confirmed anything, but with the S Series now also having S Pen support, it isn't wild to make that speculation.

Next, multitasking. Well, a smartphone of this magnitude needs to have some serious multitasking capabilities, given those with smaller screens have proven to be up to that task. Multi-screen view is back, in which you can simultaneously run two apps side-by-side. And of course, Flex Mode is also at your disposal — we termed this 'lazy mode' in our Flip3 run — where you can slightly fold the device and let it rest on a surface, then view content above while controlling it from below.

And we can well place the large and interrupted display on this section as well. Simply put, it's huge. More content to see at once. More space to navigate. Period.

Finally, design. Well, we've pretty much tackled this in the form section, right?

Except for a minor tweak in one of the lenses, the Fold3's camera stays the same — a triple-lens setup that has very decent specs, but, like with the Fold2, isn't really the star of the show. Still, it does its job.

Well, "The Thing" here is that Samsung seems to have solved the little overexposure we noticed on the Fold2; results have a warmer and more natural feel. The max 10x zoom also works decently.

Here's a sample of the ultra-wide angle mode, which, as always, crams more into the frame, just don't mind the little, inevitable warped results on the sides.

Good detail and colour. This set, along with the previous one, were taken during closing time of the mall, so some lights were off; the Fold3 does a good job of adjusting the light it needs for the final snaps.

And there's pretty nothing much remarkable to say for both the front and cover cameras — both still give good, natural-looking results without the hated overexposure.

Oh this took a while. And yes, we're starting off with the charging time; like the Flip3 (again), only a power cable is included in the box of the Fold3 without a wall plug, so we're using our trusty Samsung Fast Adaptive charger for this.

Our passing mark is 80 per cent in an hour, and this clearly doesn't make the cut. It definitely pales in comparison to the run we had with the Fold2, but keep in mind that last year's iteration came with its own wall plug. In theory, a charger with better fast-charging capabilities should do the trick, but of course you'll have to shell out extra (and a little more) for that.

But what makes up for this is the fact that the Fold3's battery holds up pretty well. It's up marginally at 4400mAh from last year's, and we're happy that it lasted until midday the following day doing anything the hell we wanted to. Take note, however, that using the camera and video app does indeed sap out juice more (as always), but otherwise it was an excellent run we had. The device also doesn't heat up.

And it drives home the point further in our standard one-hour YouTube-at-full-brightness test, which saw the Fold3 remarkably lose only seven per cent of life — a big improvement from the 11 per cent the Fold2 churned out. Of course, you actually won't be turning up full brightness when you do so, so enjoy watching more.

To the naked eye, the Samsung Galaxy Z Fold3 5G doesn't seem much of an improvement — but that's just because the headliners are not exactly you'd see immediately. The tougher build and IPX8 rating addresses scepticism on its durability, while S Pen support is a welcome addition for those who want to doodle around on larger displays. Kinda also makes your mind wander away from the Note (for now?).

And sure, the price is down. But, as with the Flip3, you have to consider that you only get the device and cable in the box; think of it as swapping out parts to make room for new and better ones, while doing that tricky balancing act of budgeting. Do the math if you wish. And keep in mind — the S Pen is sold separately; maybe Samsung can find a trick to tuck in their stylus into a future Fold, Note-style.

Make no mistake, however — and even considering the fact that Samsung is practically unrivalled in the foldable department — this is the best foldable smartphone right now.

EDITOR RATING: Maybe in a year or two, this will merit a perfect score. The price is still weighing it down. Let's see. 4.5/5